Mr and Mrs Kunenge Iornder Akwaza, the parents of late Benue state’s notorious militia leader Terwase Akwaza also known as Gana, has finally broken silence after the death of their son. Addressing different controversies surrounding Gana’s death, the duo dismissed the claim that their son left behind an army of about 200 well-trained militants in his hideout. Gana’s parents also claimed that they did not support his criminal activities until he became born again and accepted Jesus Christ.

Gana was killed by the operatives of the Nigerian military on September 8, bringing a sigh of relief to Sankera geopolitical bloc after many years of violence and breach of the peace. 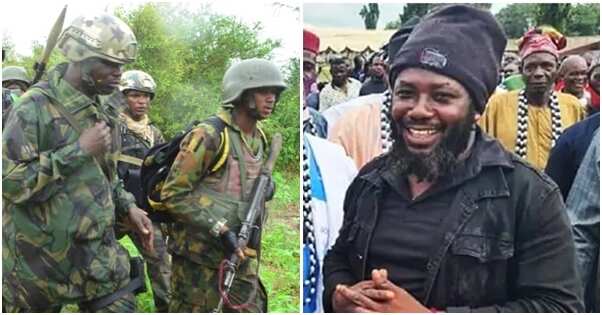 The notorious criminal met his waterloo and was subsequently annihilated three years after Governor Ortom-led government placed a N10 million bounty on information that could lead to his arrest. Mr and Mrs Kunenge Iornder Akwaza said they supported the peace and amnesty programme of the Benue state government and urged the federal government to release the body of their son for proper burial. “Since our son Gana embraced Christ and repented before his killing we beg the military to release his body to us to give him a decent burial,” Gana’s parents said. Meanwhile, the Nigerian military said it has on Monday, September 13, destroyed the hideout of the late militant leader in Takum local government area of Taraba state.

The controversial killing of Gana has hit another dimension as those who negotiated for the notorious criminal’s amnesty are now reportedly on the run amid fear of being targeted by irate youths. Richard Gbande and other leaders of the Sankera geopolitical bloc who negotiated the late crime lord’s amnesty said they are in fear because since Gana’s death there has been an impression that he and his gang were deliberately handed over to the military.