Godwin Obaseki has sent a powerful message to the All Progressives Congress (APC) candidate in the just-concluded Edo election Osagie Ize-Iyamu, with the governor urging his opponent to embrace peace and join him in moving the state forward. Speaking in an exclusive interview with BBC on Sunday, September 20, after being declared the winner of the keenly contested election by the Independent National Electoral Commission (INEC), Obaseki told Ize-Iyamu that the people have decided and it is high time he moved on.

Obaseki, who expressed shock over the massive turn-out and support from the Edo people, said the outcome of the election proved the opposition wrong on his popularity.

Newsmen recalls that after months of intrigues and political theatrics, Governor Obaseki comfortably sailed to the shore of victory as he defeated Ize-Iyamu. 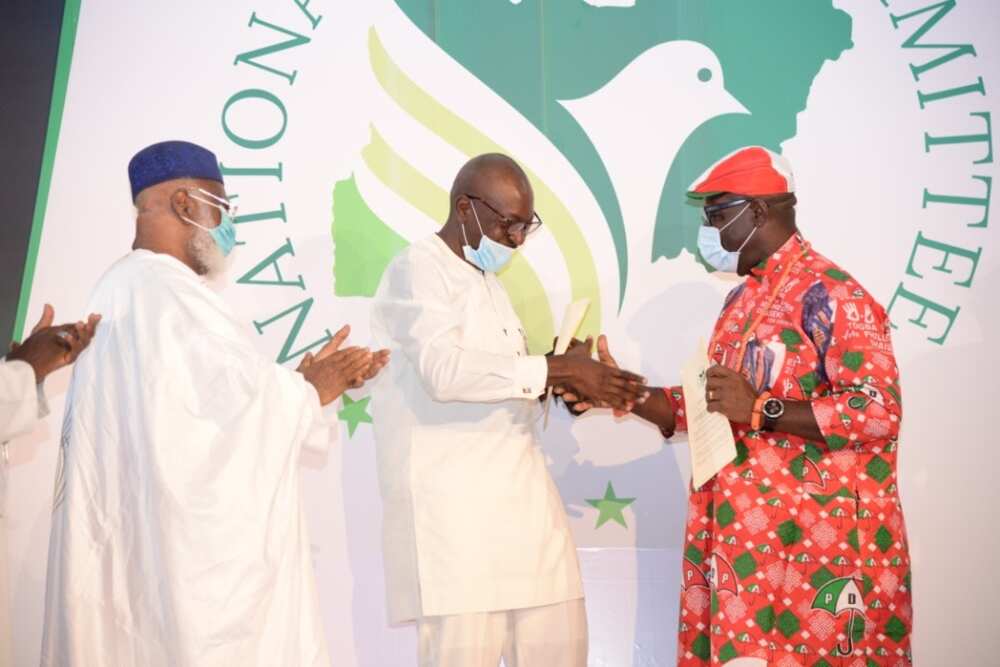 The Edo governor was declared the winner of the anticipated poll by INEC having met all requirements by polling 307,955 and winning 13 out of the 18 local government areas in Edo state. Prominent Nigerians including former vice president Atiku Abubakar, Dele Momodu, and former president Goodluck Ebele Jonathan have described Obaseki’s victory as a win for democracy and end to political godfatherism. Obaseki noted that this will be the second time he would contest against Ize-Iyamu. He added that it is high time both joined hands together since they came from the same area “We have contested before, we still contest again. And if you see the result in 2016 and 2020, you will truly know what people want.

“We are brothers and we come from the same place. Why are we even contesting? is it not to serve people? as people have made their choice, he should join me so we can work together to build the state,” Obaseki said.

Meanwhile, Obaseki has eulogised President Muhammadu Buhari for showing fairness and defending democracy in the just concluded Edo guber election. Obaseki also showered a flurry of encomiums on the president for giving the Independent National Electoral Commission (INEC) the free ground to conduct the election without any prejudice due to political differences.

Money Matters With Nimi: What Parents Need to Know Now that Schools Have Resumed