Between Obaseki and Ambode 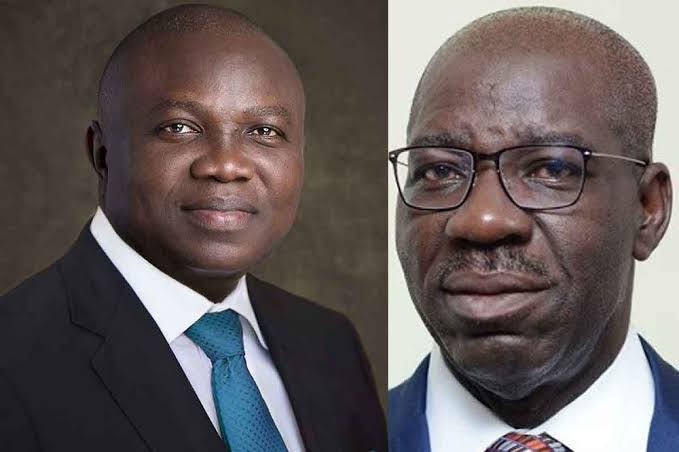 In the aftermath of Saturday’s governorship election in Edo State and the victory of the incumbent governor, Godwin Obaseki, some have drawn comparisons between Obaseki and the immediate past Governor of Lagos State, Akinwunmi Ambode.

These arguments have gone as far as suggesting that bravery and the lack of it mark the difference between the two. Some even identified Ambode as a weakling who is a “chicken hearted” (real Yoruba man). Aside from the unfortunate stereotyping of conclusions like this, they also reflect a basic misunderstanding of how politics runs in Nigeria; reason for which politicians will continue to play on the intelligence of the people.

While it is true that the scenarios that played out in Lagos and Edo are similar, the circumstances under which they played out differ significantly. They differ to the extent that anyone who found himself in Ambode’s shoes would most likely have ended up the same way, regardless of how brave or timid, they might be. In fact, beyond serving as a precedent and possible template for handling political tyranny, Ambode and Obaseki found themselves in situations that were fundamentally divergent. I will explain.

The first advantage Obaseki has over Ambode in their identical battle for political survival is that the former saw the future quite early in his administration and as a result, started his fight really early. Ambode did not appear to have been given any suspicion that the tide would turn against him until towards the end of his term, such a time that it was too late to mobilise against a formidable godfather.

And this particular point shows the wide margin of skills between the godfathers in Lagos and Edo states. While Asiwaju Bola Tinubu in Lagos was able to keep his plans close to his chest until the battle became expedient, Adams Oshiomhole, garrulous and exuberant by nature, let the cat out of the bag prematurely. He started a fight for which he had neither arms nor ammunition and got worn out before the D-Day.

Here is the point about being instrumental to the election of a governor in Nigeria: Do not, for a moment, let your eye go off the political structure, it is the wind behind your sail.  Now, it is easy to lose the political structure for a godfather who is not necessarily in any office credited with the benefit to dispense monetary and other forms of patronage that oil the machinery of the politics of money and power that we play in Nigeria.

Compare such a political wheeler-dealer to a governor who sits on the resources of his state and is literarily a god to every political force in that state. From awarding contracts, to allocating resources to other arms of government, favouring local governments and communities, to dishing out appointments at will, a governor is able to win the loyalty of any and every one in any state where a godfather takes a one-minute slumber. This was Oshiomhole’s most grievous error. While he was at the APC national chairman’s office in Abuja beating the air and picking up quarrels with his state governor without building a base at home, Obaseki was cultivating and sowing the seeds from which he built a groundswell of political loyalty and arsenal for the day of war.

While Oshiomhole was pontificating and telling the whole world how he was going to make mincemeat of his erstwhile protégé, Obaseki was busy taking over territories, building goodwill and winning people to his side. He took over the state executive of the All Progressives Congress, moved to the local governments, did the same and then proceeded to the wards! He got so influential in the party that when he was going to end Oshiomhole’s career as national chairman, it was from right from under the former chairman’s roof that the killer bullet was fired!

Most importantly, the governor took over the control of the legislature from the very start and with this, put an end to any fear of impeachment. Imagine if the August 6 attempt to take over the legislature by 17 members (some of whose seats had been declared vacant) had the force of law. Those men would have impeached the governor and his deputy while the speaker would have taken over the affairs of the state pending an election. But Oshiomhole and his morsel of supporters learnt this strategy rather too late.

This is where Tinubu is different! Keen observers of Lagos politics will remember that the Lion of Bourdillion as they call him, hardly ever engaged in any exchange of words with Ambode. Being a former governor himself, Tinubu had built a college of followers and leaders who have become proxies fighting his war.

All across Lagos, regardless of chances that resources lubricating the machinery of these loyalists may even be dispensed by the governor, the structure of the party is hardly in control of the sitting governor. Tinubu has the loyalty of influential men and women who in turn control the grassroots. While he is the power behind the throne, the voices, legs and hands of other people do the job. It would therefore take more than a sudden realisation that your ambition is in jeopardy (as it was with Ambode) to successfully confront a Tinubu.

The confidence Tinubu had in his structure and foot soldiers would account for the insistence of the APC on direct primary towards the 2019 governorship election.  A governor, resources of the state still in his control, is able to hijack delegates that decide the fate of aspirants in an indirect primary. Such primary has become waiting avenues for the democratisation of what every politician sees as the national cake and as a result, nothing can be predicted. So, while the party machinery in Lagos State denied Ambode the right of first refusal, it saw the dangers inherent in not allowing an indirect primary election (given the much-touted democratic credentials of its leader), and chose the direct format to seize control from Ambode.

This totally contrasts with Oshiomhole who resorted to underhand tactics culminating in the disqualification of Obaseki from the governorship primary of the APC in the state.  That of course, was a costly miscalculation, which left Oshiomhole with the mere shell rather than substance of a party as shortly after, Obaseki moved to the Peoples Democratic Party with literarily everyone that mattered in the state chapter of the APC in tow! So, while Tinubu is deft at concealing the end goal, building an army of loyalists who are ready to take the bullet for him, the former labour leader shelled out his strategy ahead of time and fought a largely solitary battle.

However apart from the political dynamics and individual traits of the dramatis personae, which swung victory in favour of Obaseki and the PDP, Nigeria has President Muhammadu Buhari to thank for the what seemed to be the true reflection of the people’s will.

And this has nothing to do with his refusal to allow the security agencies intimidate voters and adopt some of their known suppressive strategies, which a lot of people justifiably suggest may have been inspired by the threat of the United States and the United Kingdom to deny perpetrators of electoral fraud and violence visas.  Generally, Buhari governs Nigeria with some Catholic aloofness, which otherwise annoying, may ultimately serve the greatest good for Nigeria’s democracy; a profound irony undoubtedly.

Given the powers and resources available to Nigeria’s President, Buhari could have swung this election in favour of the APC by winning many of the stalwarts of the party who were at odds with Oshiomhole back to the fold. There are loads of legitimate incentives the President could have harnessed to calm frayed nerves in his party across the country, but he trudged, and still trudges on like he is even unaware of the use to which politicians have put board parastatals, ambassadorial positions and such over the years.

That he refused to intervene in the long-drawn-out war between Obaseki and Oshiomhole may as well be a sign that the President would rather allow the people ultimately decide for themselves or for some heavenly forces, intervene. On the one hand, this smacks of negligence or a lack of capacity to act but it could also imply an opportunity for the people to be the final arbiters. That is the point democracy should start heading towards in Nigeria and, Buhari may just be able to take us there, even if unwittingly.

I used to be a plumber, says Sanwo-Olu