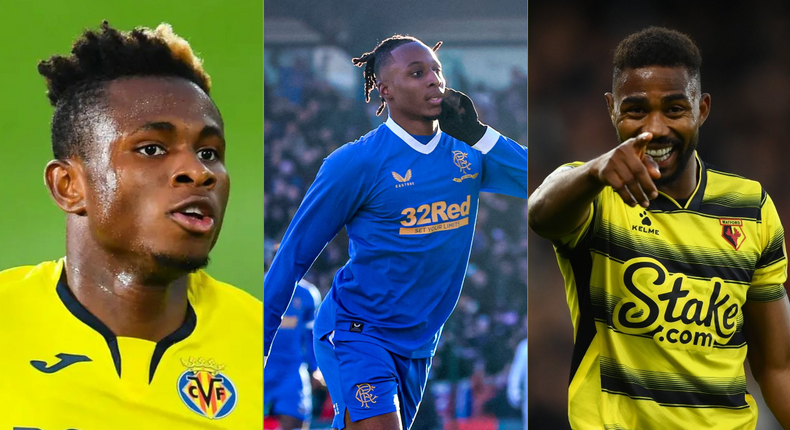 Super Eagles players continued from where they stopped last weekend with Samuel Chukwueze and midfielder Joe Aribo the latest to register their names on the score sheet.

In summary, it was an average weekend of football from a Nigerian perspective in Europe and Euro Eagles will take you through some of the performances.

As usual, let’s kick this off with the very good ones;

Samuel Chukwueze came off the bench to score his first LaLiga goal of the season in Villarreal’s 1-3 defeat at home to Barcelona.

Villarreal were trailing at home to a Frankie de Jong goal before Chukwueze leveled things up on 65 minutes, 11 minutes after he replaced Yeremi Pino.

The goal was his first in the Spanish league since April 2021, also against the same opposition (Barcelona) at the same venue, Estadio de la Ceramica.

Joe Aribo was another player to find the back of the net after a while, and what an effort it was against Livingston in the Scottish Premier League on Sunday.

With his club, Rangers, leading 1-0 thanks to a perfectly lobbed goal from Scott Arfield, Nigeria’s Aribo produced a stunning strike on 16 minutes to double their advantage. The home side did pull one back before the break but Aribo, played from start to finish alongside Calvin Bassey, and Rangers added a third goal through Zambia’s Fashion Sakala to seal the win and three points.

Aribo’s goal was his first in the league since November 7th and his fourth of the season.

In England, after sacking Manchester United manager Ole Gunnar Solskjaer with that impressive display the last time, Emmanuel Dennis was again at it, this time at the King Power.

Leicester had taken the lead after a moment of madness from Super Eagles centre back, William Troost-Ekong, Dennis produced a moment of magic to bail his compatriot and teammate at Watford.

The 24-year-old forced Ndidi to concede a penalty after successfully leaving him for dead inside the box and the defensive midfielder fouled him. Josh King stepped up to equalise for the Hornets.

However, two goals from Jamie Vardy quickly put Leicester in the driver’s seat at the break.

In the second half, with visibility poor due to the heavy snow, Dennis once again proved to be the main man for his side as he pulled one goal back to make it 3-2 after stealing the ball from Timothy Castagne to dink past Kasper Schmeichel in goal for the Foxes. He was substituted moments later due to suspected injury but that was not before Ademola Lookman ensured the three points stayed at the King Power when he added a fourth goal for Leicester.

At the Brentford Community stadium, Frank Onyeka had the last laugh in another battle between Super Eagles players in the Premier League.

Onyeka’s Brentford defeated Alex Iwobi and Everton at home courtesy of a lovely first half penalty goal from Ivan Toney. Both Nigerians featured from start to finish and had above average performances for their respective teams.

But Onyeka picked up a first half yellow card, his second of the season.

Now, the not so good ones;

Goalkeeper Maduka Okoye was an injury concern after the youngster was substituted on 24 minutes with a shoulder injury during Sparta Rotterdam’s narrow 0-1 loss at home to Ajax. Super Eagles defenders also had a weekend to forget, Jamilu Collins lasted just 46 minutes before he was taken off, Troost-Ekong contributed to Watford’s heavy defeat with a bizarre error in England.

Zaidu Sanusi conceded a penalty and was substituted on 68 minutes as Porto came from behind to beat Vitoria de Guimaraes 2-1 in Portugal.